What did I do that was cool this weekend? I closed the last-standing Hostgator account I maintained and I downgraded my DeployHQ plan to the free plan. Side effects of today’s hosting game. The game has elevated significantly in a crazy short amount of time. Do you need me to name all the players? We have accounts with SiteGround (which this site is hosted at) and WP Engine (where we have referred a number of clients to) and elsewhere. They’re but two players in an increasingly crowded sandbox. I’m a happy user of both. Sure, sometimes there are issues, but every host has them. However, I’m pretty happy to say that our agency is a preferred Silver Partner with Pantheon… and it’s not because of the sweet shirts (although they are pretty rad).

Before we get into this know that this is a pretty lengthy post. I should also note that I didn’t get paid for this and any links to their products and all that aren’t affiliate links. I’ve been using their platform since October of last year (2014) and this is merely my take on it.

A Platform That Gets it.

We can talk about specs and speed. Those things are important. We can talk about affiliate programs, because money is money. But I’d like to talk about why I became a partner of Pantheon’s. I’d heard of them for a while, seeing the name, hearing about them from people like Cal Evans… It all led me to a Pantheon event, just ahead of WordCamp SF. Josh Koenig, one of the founders, absolutely won life with an amazing demo of standard developer workflows within the Pantheon platform. It was slick and it looked mature. How is it better than, say, SiteGround, which also has easy-to-setup and use Git functionality? That’s pretty much a no-brainer.

SiteGround and WP Engine, yeah they get it, too, but there is a difference. Pantheon isn’t really built for the average user and I think that’s what really motivated me to learn more about their offering. They don’t offer cPanel or Softaculous and they don’t need to. They want to do one thing well: Help you manage your site better and more intelligently and improve your workflow. What Pantheon has managed to do is provide an enterprise-level solution that’s also accessible to everyday developer and I like what I see, thus far.

A dashboard that is actually useful.

Okay, look. I know, no one gives a shit about dashboards anymore. Remember when that used to be a selling point? But, seriously, this thing is a joy. Without clicking through bazillions of pages, I can review recent commit history; look up basic commands that might be useful, toggle my connection between SFTP and Git, and a lot of other stuff. It’s not that it’s necessarily pretty, it’s just essentially useful. 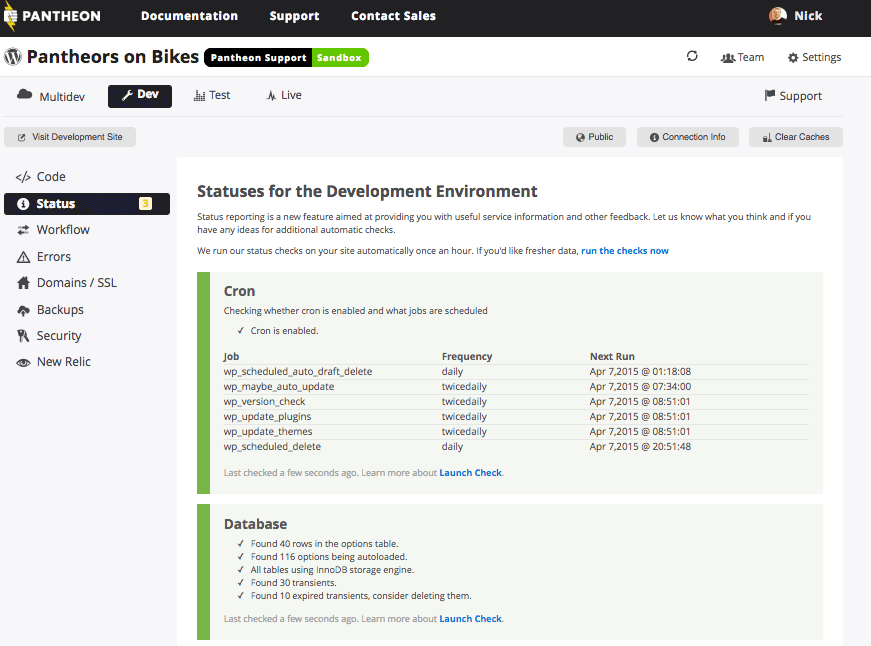 Simply add your ssh key and clone down the repository. Boom. Done. __OR__ if you have an existing codebase, you can upload it to Pantheon, where they’ll make a repo which you can also download. I dig choices.

Switch between SFTP and Git easily

Some of you might be scratching your heads. Why? Who cares? Why is this an actual “feature?” It’s not one I’ve had to use too many times, but if you want to upload files via SFTP you need to switch your connection mode to SFTP. One of the benefits of that is changes that you make to the site this way are then committed when you switch the connection mode back to Git, which I think is pretty useful. Also, this prevents folks from installing plugins all willy nilly if the site is set to Git connection mode. If downtime truly matters, then the live site really shouldn’t have any work being done live on it in the first place, and those changes should be pushed from a Staging environment. Just my 2 pennies, based on a lot of meetings where Root Cause Analyses needed to be presented. Yes, I’ve crashed a lot of sites in my day.

Proper Dev, Test and Live environments in a snap

One click staging environments are old news, everyone has them and Pantheon is no different. What I like here is that they provide a greater granularity of control over the process. Specifically, I can spin up a Dev Site, configure it to have no caching and push my changes there. When I’m ready, I can spin up a Test Site by cloning over my Dev changes and I can then push my updates there, enable caching so I get a better idea of how the site will perform for going live. I can make these sites publicly viewable or hide them, too. And when I’m ready to go, I can create a Live Site; which I can then transfer to my client for billing purposes, or I can hold on to the site… The other thing I find nifty is how easy it is to clone one environment over to another. I can cone dev to test or live, or in any combination of ways I want, I won’t do that, but that control exists.

The fact that there’s an extra “Test” environment makes me happy purely because it’s essential to have a like-for-like server setup that mirrors the live box. With WP Engine, you get the two environments and that’s great. But caching can be problematic since it’s disabled. If you have a complex infinite scrolling site setup, you need to see how your work performs on a fully configured/enabled server. With WP Engine I could do that, but I’d have to spin up another instance altogether; which is fine, but not ideal. I like that I can test my changes ON the Test site and when they look good, I can then either push the changes via Git to live, or I can simply clone from Test to Live knowing that nothing will break. 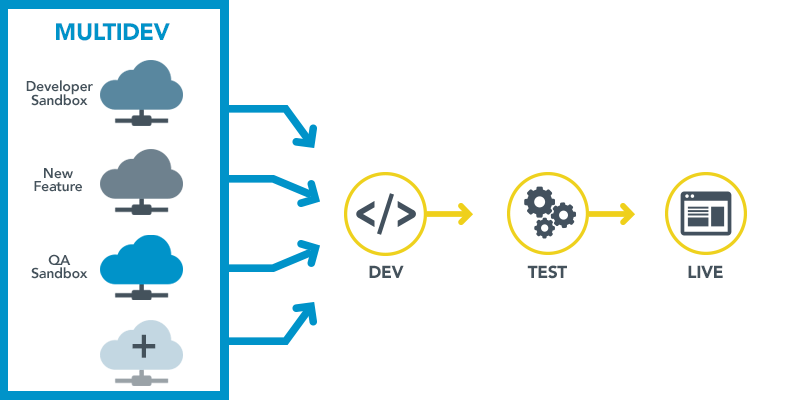 Okay, I’m not gonna lie, I had a hard time grasping this concept, because it really didn’t seem any more different from a bunch of folks using Git and merging commits, branches etc. together.  But it’s a bit more in-depth and when I saw Josh Koenig (one of Pantheon’s co-founder dudes) demo this feature I was impressed. I called my mom to tell her. “That’s nice, son,” she said. Seriously, though, it’s an improved workflow for larger teams and allows everyone to work on their own local devs, push their changes back to the corresponding Pantheon environment without borking anyone else’s work. When folks are ready, they can merge their environments back safely, Pantheon provides the commands to do this easily and safely, though, you need to be cozy in the command line with Git, which I’m not, but I managed my way more than a few times now.

One nifty feature that I’m stoked about is a Change Management feature. It’s a formal way of handling who is able to make changes and approve them only after they have been reviewed. If you’re an Agency Partner, you’ll get access to this feature. Again, you probably won’t need this for smaller sites, but when you start working with larger projects, other teams etc., it becomes essential to put controls in place to protect everyone’s work and sanity. Change Management wasn’t just made to pick on people with half-baked changes that will torpedo stuff, it was made to avoid such things. I haven’t had that since I worked as a Systems Engineer at a large insurance company. It sounds pretty sweet.

So those are a few reasons why we decided to saddle-up with Pantheon for the foreseeable future. It’s a solid and well-designed platform aimed at people who build and manage sites for a living; see the difference.